The NVIDIA GeForce RTX 4000 series is NVIDIA’s newest line of graphics processing units (GPUs). NVIDIA is one of the largest manufacturers of graphics technology.

Gamers and tech fans have been looking forward to the release of these GPUs because of their expected performance and new features.

In this article, we’ll take a closer look at the release date, price, specs, and benchmarks of the Nvidia RTX 4000 series GPUs series, as well as the potential benefits and applications of this technology.

NVIDIA “cancelled” the 12GB RTX 4080 due to negative feedback from the public and gave it a new moniker, the RTX 4070 Ti (based on certain leaks from Gigabyte). According to rumours, this card will be on sale on January 7, 2023.

It’s important to note that when a new GPU comes out, the company that makes it usually releases a series of updates and announcements.

As the release date gets closer, more information will likely become available. They predict that Ampere Next Next, or the RTX 5000 series, will be ready by 2024.

It’s important to remember that NVIDIA GPUs usually cost more than other GPUs because they perform better and have more advanced technology.

The RTX 4000 series is coming with this starting price shown in the table below.

It is also possible that NVIDIA will offer a range of price points for different models within the RTX 4000 series, allowing customers to choose the GPU that best fits their needs and budget.

Wccftech did find a few RTX 4070 Ti AIBs for sale in Chinese online shops, though. They are all above $1,000 each. But according to current information from WCCFTech’s sources, NVIDIA will accept a $799 MSRP for the RTX 4070 Ti.

We predict that the 4070 Ti will rarely be purchased at MSRP because it won’t have a Founders Edition and will only come in AIB variants.

Nvidia has now officially confirmed several previously unconfirmed specifications for Adrenaline graphics cards. The most pressing of these is how powerful Ada itself and the new architecture will be. 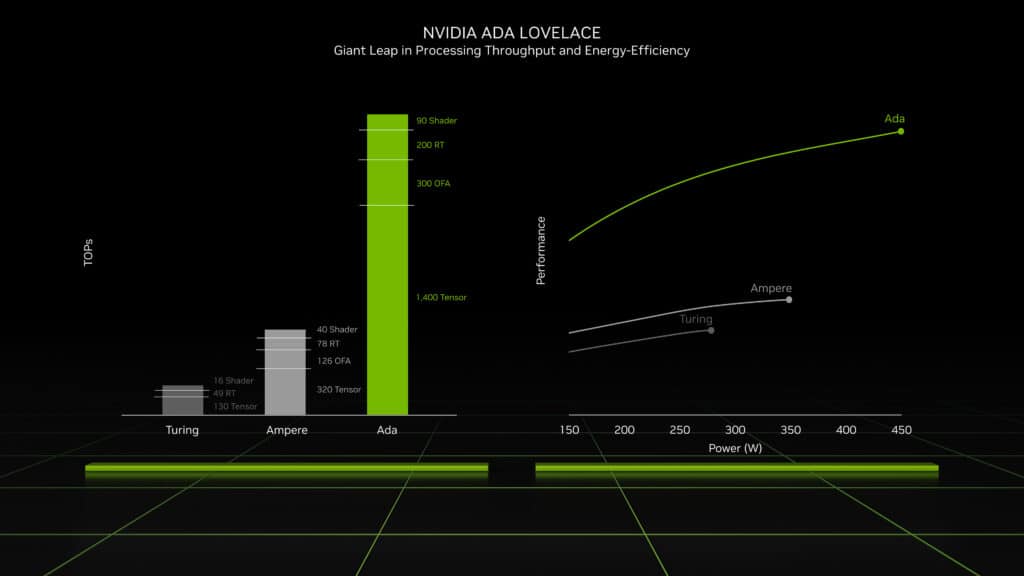 Here, we’ll stick to the highlights and keep things brief:

This means that games and software that use the GPU a lot will be able to do ray tracing much better and at higher frame rates than they could with Ampere.

However, we’ll go into more detail about performance later on in the essay. The hardware for the RTX 4080 and RTX 4090 has not yet been fully revealed. But what has been revealed is quite positive.

This indicates that the new Ada flagship has 5,632 more CUDA cores than the RTX 3090 Ti while still using the same amount of VRAM and TDP. There were rumours that the TDP was much higher, but this is no longer the case.

The 12GB model, which has 7,680 CUDA cores and supposedly outperforms the previous flagship, is also doing well.

There are also rumours that the RTX 4000 series will support several other advanced features, such as DLSS (Deep Learning Super Sampling) and NVLink, which improve performance and let devices connect with each other.

Comparison of the RTX 4000 Series and RTX 3090 specifications:

In terms of gaming, the RTX 4000 series is expected to have smooth, high-resolution graphics and support for ray tracing, which can make games more realistic and immersive.

The RTX 4000 series may also work well for professional applications that need high-quality graphics, such as video editing, 3D modelling, and scientific visualization.

How How To Rollback NVIDIA Drivers in Windows?
To Enable Nvidia Fast Sync For A Smoother Gaming Experience?

The NVIDIA GeForce RTX 4000 series is an exciting step forward in graphics technology. While the exact release date, price, and specs have been mentioned in this blog, the expectation is that these GPUs will set a new standard for performance and innovation. We have mentioned here everything we know till this date about the latest Nvidia 4000 series cards. Stay tuned for updates and official announcements from NVIDIA’s new RTX 4000 series.

What is the strongest RTX?

The most powerful and effective consumer graphics card available is the Nvidia RTX 4090.

Even though they didn’t come out at the same time as the more expensive Ada graphics cards, the RTX 4070 and RTX 4070 are likely to be released in 2023. This is in line with the release of the RTX 30 series, which was followed by lower-end hardware.

Will Ada and the RTX 4000 series coexist?

As the lower-end Ampere hardware gets closer to being on the market for two years, we should expect prices to go down.

Is RTX or AMD better?

The AMD RX 6700 XT comes close with 56 fps, while the Nvidia RTX 3070 just manages 62 fps. Naturally, increasing framerates will result from lowering the graphics preset. In terms of 4K and ray tracing capabilities, AMD is significantly outperformed by Nvidia.

Sahil is an experienced author and content creator who specializes in gaming technology, gaming hardware, and gaming software. He has written for numerous publications and reviews the latest gaming hardware and software. He has experience with various gaming setups and is always willing to answer questions. His reviews are honest and thorough, and his passion for gaming and commitment to providing accurate information make him a great source of information for gamers.